WOE IS ME/VICTIM
Feels easily overwhelmed by own vulnerability, does not take responsibility for own situation. Acts helpless so others can rescue 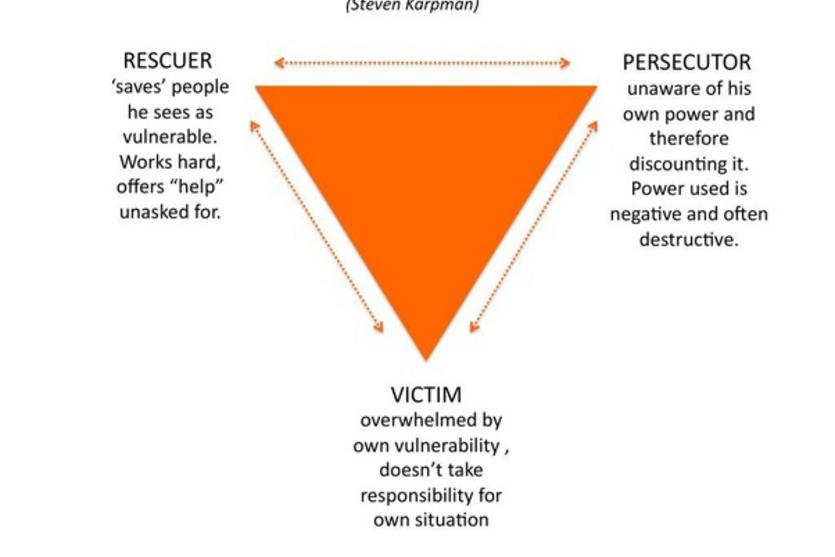 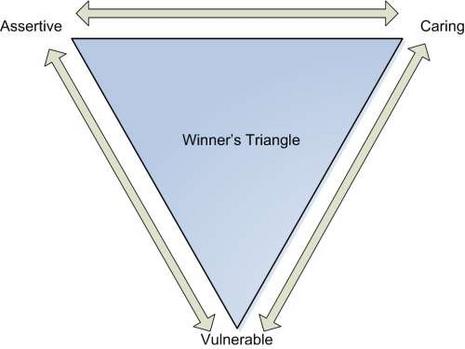 This Drama Triangle is a social model of interaction that shows how many of us deal (or don’t deal) with our personal responsibility inside of conflicted, drama intense relationships involving power dynamics; i.e., usually relationships with disordered people, but not exclusively.

According to Steven Karpman, (and Lynne Forest and others), the Drama Triangle outlines the three faces of the victim mindset. The breakdown is as follows:

The reality is most of us, whether we’re disordered or not, respond to power dynamics and relationship challenges via this triangle, and it sucks because it’s a loose-loose game where everyone fails. And what’s even more interesting is that most of us have a role we typically default to or prefer to play in these Drama Triangle.

Each person has a primary or most familiar role – what I call their “starting gate” position. This is the place from which we generally enter, or “get hooked” onto, the triangle. We first learn our starting gate position in our family of origin.

People play these different roles at a much more extreme sport level: The Persecutor on the Drama Triangle is the bad player; the Rescuer is the Hero in shinning armor; the Victim is the Woe is me person. And! They’re highly effective at pulling people into the other positions in the triangle!

So how do we get out of the triangle?

1.     First and foremost, we bring awareness to the fact that we have fallen into a Drama Triangle and also we become willing to admit which position we’re playing in. That’s right! If we’re playing the role of the Victim (or Rescuer, or Persecutor), admit it to yourself. We can’t stop the behavior and the thought patterns and move out of the power struggle (the drama), if we aren’t willing to admit there’s a co-created dynamic at play.

3.    We next, when necessary, stop struggling RIGHT NOW against the other participants in the triangle. We don’t yield to them, either. Instead we make a countermove that forces them to fully take an awkward, indefensible, or unreasonable position. As an example, I do so by acknowledging their opinion, their thoughts, their behavior – their whatevers – in a neutral manor, and then I ask something that puts the focus back on them. For instance, the other day a woman I know who tends to start fights, attempted to do so when I expressed an opinion about a movie. I didn’t respond to her tone or invitation for a fight. Instead I acknowledged her strong feelings about the movie. I said, “you have a lot of strong feelings about this movie. Would you like to share something more about that?” She continued trying to bait me into a fight and I simply continued my tactic of neutral acknowledgement and counter ask. Eventually she just gave up the fight. If we successfully take the center position, usually the opponent will back off rather than risking unmasking themselves and their exaggerated role.

4.    We also begin to look at and break away from needing to be right and superior or inferior in our relationships. Almost all of these conflict driven relationships and interactions are grounded and constructed in the tension of who is better than or worse than; who is right and who is wrong; who deserves blame and who is defenseless, etc. If we want to stop the drama, we need to stop putting ourselves and others in the one-up or one-down position.

In the Winning Triangle, we:

Assert rather than persecute. Instead of blaming and punishing i.e., persecute, we give up the need to force or manipulate others to do what we want and instead we assert ourselves.

Þ We Ask for what we want

Þ We say no to what we don't want

Þ We give constructive feedback

Be vulnerable, instead of being a victim. Instead of believing we’re
​hopeless and that we need to be rescued or feel we need to have others
​fix or save us, i.e., be a victim, instead we make the effort to learn how:

Þ To be emotionally mature, which means vulnerable, not needy

Þ To take action! And to make positive change happen

Þ Provide reflection, support ONLY if the person asks and is taking the lead themselves

As I said at the start, my hope is that arming ourselves with knowledge, and becoming more aware of these power dynamics and pitfalls, will help stop the negative triangulation of these triangles much more quickly, and that it helps us avoid the habit of entering into these crazy making, destabilizing arguments in our regular every day relationships.

IDENTIFYING OUR DYSFUNCTIONAL ROLES IN DRAMA-CONFLICTS

PERSECUTOR
Feels powerful being critical, therefore discounts others as weak. Feels superior, judges, knows it all, tells others what they should or shouldn't do often without meaning to assist.

RESCUER
​FALSE HERO
"Saves" people they see as vulnerable only to feel good about themselves. Has an agenda. Tends to work hard at offering help not asked for