The reality is most of us, whether we’re are aware or not, respond to relationship challenges via this triangle, and it sucks. And what’s even more interesting is that most of us have a role we typically default to when tension and issues arise. Some people act out these different roles at a much more extreme level:

The Persecutor becomes the bully/ abuser; the Rescuer is the GOOD guy, the best student, the go to guy; the helpless victim becomes victimized in adulthood too. AND we become really good at manipulating others into the drama roles so we get our needs met...

Getting out of the triangle

1.     First and foremost, we must become aware and ACCEPT the fact that we have fallen into a ROLE in the drama triangle. That’s right! If we’re playing the role of the Victim (or Rescuer, or Persecutor), admit it to yourself. We can’t stop the behavior and the thought patterns and move out of the power struggle (the drama), if we aren’t willing to admit there’s a co-created dynamic at play.

2.     Second, once we’ve done that, we need to stop participating in the drama and resist AT ALL COSTS the roles we engage ourselves in. We take responsibility for our part of the drama and we stop playing the part of the Victim, Rescuer or the Persecutor.

3.    Next, we stop struggling RIGHT NOW against the other participants in the triangle. We don’t yield to them, either. Instead we make a countermove. As an example, we do so by acknowledging their opinion, their thoughts, their behavior – their whatevers – in a neutral manor, and then we ask something that puts the focus back on them.

For instance, the other day a woman I know who tends to start fights, attempted to do so when I expressed an opinion about a movie. I didn’t respond to her tone or invitation for a fight. Instead I acknowledged her strong feelings about the movie. I said, “you have a lot of strong feelings about this movie. Would you like to share something more about that?” She continued trying to bait me into a fight and I simply continued being neutral and not go to a persecutor to Rescuer mode. Eventually she just gave up the fight. If we successfully stay in a neutral position, usually the opponent will back off rather than risking unmasking themselves and their exaggerated role.

4.    We also begin to break away from needing to be right and superior or inferior in our relationships. Almost all of these conflicts are grounded and constructed in the tension of who is better than or worse than; who is right and who is wrong; who deserves blame and who is defenseless, etc.

IT's ALL ABOUT EGO... If we want to stop the drama, we need to stop putting ourselves and others in the one-up or one-down position. Meaning stop being so competitive with your spouse, friends or children! This is not a competition!

So what does it look like when you are done and OUT of the Drama Triangle? It looks like this:

Healthier roles: These roles are CONSCIOUS and need to be practiced:

REMEMBER, You have the right to:

​VICTIMY
​Says "Poor me, this is always happening to me, You are doing this to me"

The Drama Triangle describes dysfunctional relationships where the people in  relationships shift between three roles, Persecutor, Rescuer, and Victim, all held in place by guilt and blame....All, to avoid personal responsibility.

When you find yourself stuck in a self-defeating or self-serving role, it’s horribly easy to end up in an extreme state that doesn’t help anyone, neither you nor the people you’re interacting with. The idea is to move away from the extreme edges of the triangle towards the centre, where there’s a much healthier and more positive balance.

By doing this we move from being an oppressive persecutor to an assertive person with good boundaries. We shift from playing the role of helpless victim to a less vulnerable state of self-awareness. We stop being self-sacrificing rescuers and move towards attunement and compassion. 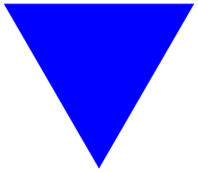 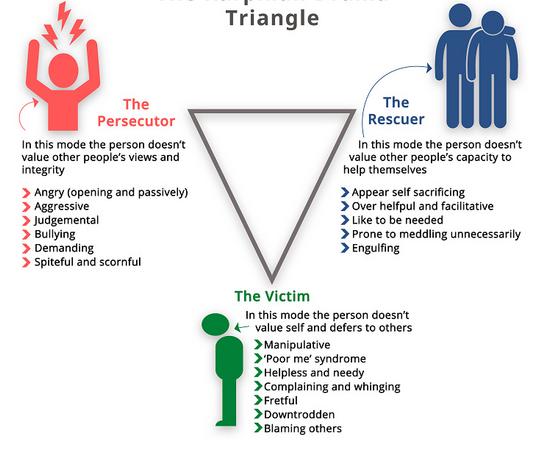