NON VIOLENT COMMUNICATION​
​Nonviolent Communication (NVC) is a process of communication
created by psychologist Marshall Rosenberg. It is a compilation of
​ideas about compassionate human behavior, packaged to meet the

Observations: Description of what is seen or heard without added

interpretations. For example, instead of “She’s having a temper tantrum,”

you could say “She is lying on the floor crying and kicking.” If referring

to what someone said quote as much as possible instead of rephrasing.

Feelings: Our emotions rather than our story or thoughts about what others are doing. For example, instead of “I feel manipulated,” which includes an interpretation of another’s behavior, you could say “I feel uncomfortable.” Avoid the following phrasing: “I feel like . . . “ and “I feel that…” — the next words will be thoughts, not feelings. 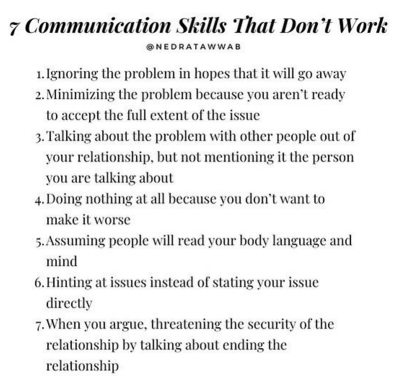 Needs: Feelings are caused by needs, which are universal and ongoing and
not dependent on the actions of particular individuals. State your need rather
than the other person’s actions as the cause. For example, “I feel annoyed
because I need support” rather than “I feel annoyed because you didn’t do the dishes.”

Requests: Asking concretely and clearly for what we want (instead of what
we don’t want). For example, “Would you be willing to come back tonight at
the time we’ve agreed?” rather than “Would you make sure not to be late
again?” By definition, when we make requests we are open to hearing a “no,”
taking it as an opportunity for further dialogue.

Empathy: In NVC, we empathize with others by guessing their feelings and
needs. Instead of trying to “get it right,” we aim to understand. The observation
and request are sometimes dropped. When words are not wanted or are hard
​to offer, empathy can be offered silently.

Self-Empathy: In self-empathy, we listen inwardly to connect with our own feelings and
​needs. It is that connection which enables us to choose our next step.

For example, “I feel disappointed that you cancelled at the last minute” rather than “You’ve let me down again”.

​
Clearly express how you feel

people don’t always get the message.

For example, a friend seems withdrawn and you suspect they are angry with you. You say: “You seem quiet. Have I done something to upset you?” or “Is everything OK?”

​
For example: “Look Sam, I feel really awkward about bringing this up but…” or “Alex, I need to talk to you about something and I’m feeling nervous about it. I don’t want to hurt your feelings, but if I don’t say anything, I think I’ll continue to feel upset.”

Be aware of your body language

REMEMBER, You have the right to: